Where my articles grow up before they go public 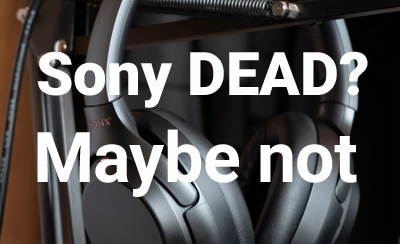 Are your Sony WH 1000XM3 or Sony WH 1000XM4 headphones dead? It happened to me. They stopped working just one month out of warranty. The charge light would not even come on. The only thing that worked was that I could still get sound when using an audio cable.

I called Sony to get help. As soon as they heard that the WH 1000XM4 headphones were out of warranty, the Sony support representative said that that there was nothing that could be done and hung up the phone on me.

I realize that the Christmas holidays are a busy time for Sony (especially if this is typical of their product?), but they should really teach their support staff about common courtesy. It just takes a few seconds and can make a huge difference in how their clients feel about Sony products. It really does reflect poorly when your support staff seem more interested in processing as many calls as possible rather than treating their existing, and often loyal customers, like gullible marks. It really felt as if they were saying to you, "We already got your money. That is all that matters to Sony."

After that call, I never wanted to buy another Sony product again. I may not like it but I understand that where the quality of workmanship, reliability and durability has gone down over the past 30 years in favour of planned obsolescence, limited life, and disposable product so that corporations can sell you products more often. But you would think that these same organizations would also have figured out that, if you want customers to buy from you again and more often, at least make them feel good about their purchase and your support. Otherwise, what they are really doing is handing their customers over to the competition.

Since Sony wasn't going to help, decided to see what I could do about it on my own. When I have a defective device that is ready to be dumped in a landfill, I make one last attempt and take it apart. At the very least, I will learn what it looks like inside. At best, I will find the problem and be able to fix it. In my experience, I am amazed at how often I find a way to repair things that seemed ready for the garbage. Sometimes, it can be a fuse, a solder joint, a loose connection, a dirty connection, a broken wire or a battery. Sometimes I take a chance and replace low cost parts with new or used ones found on the Web. It is truly amazing what we toss out for issues that, with just some basic skills, could be repaired. At worse, I took a chance, spent an hour or so and ended up putting it in the garbage anyway. Of course it is important to be cautious and it often helps to have a basic understanding of electricity and electronics, especially what not to touch such as high voltage (those shocking memories of sticking my fingers in a laser printer still hurt).

At first, I suspected the battery. Using a simple voltmeter, I was able to determine that the battery had power. However, since it was not receiving any power to charge it, I shifted my suspicion to the USB connector and was ready to purchase a replacement part. I was disappointed to discover that it seems to be impossible to find a replacement USB-C Charging Port board for the Sony WH 1000XM4. I could only find ones for the Sony WH 1000XM3 which seemed to be similar but not identical. Without having access to replacement parts, the situation seemed hopeless so I reassembled it. At least I could still use them as un-powered tethered headphones.

But then, as a last resort, I turned to the world wide web for support. I was delighted when I came across a YouTube video that described troubleshooting techniques you can try to revive the Sony WH 1000XM3 and Sony WH 1000XM4 headphones.

More and more simple electronic devices include microprocessors and run the software. My colleagues are always amused when I get on a Zoom or MS Teams call and they need to wait while I boot up my headphones. Just a few years ago, you were able to simply plug a pair of headphones into an audio jack and get sound instantly. Today, TVs, phones and even my blender need to boot up. The problem with computers large or small is, either due to a bug or some unexpected glitch in electricity, sometimes these tiny computers lock up -- like your computer or laptop might do.

I must confess that I was skeptical when the presenter in the video suggested proceeding with the instructions even if the headphones seemed completely dead. However, after a couple of cycles of soft and hard resetting the headphones, I was so excited when I saw the red charge LED come on for the first time in a week.

This is the video that saved my headphones from a landfill. I am very grateful for the effort that this person put into creating the video and for sharing it with the world. I hope it helps you too.

If your electronic device (not just headphones) stops working without warning and otherwise was working just fine before, don't give up. Take a few minutes to research the problem. The web is an amazing resource and the solution to your seemingly hopeless problem issue might be just a few clicks away. Remember, you have nothing to lose but a few minutes of your time. It would probably take you longer to shop and purchase a replacement.

The articles on this website are not ready for the public. They are drafts of articles that may eventually make it onto my websites. Feedback and questions are always welcome.

All content on this website is Copyright © 2004-2021 TNG Consulting Inc. and Michael Milette. All rights reserved. Do not reproduce without written permission.

Theme by Anders Noren — Up ↑